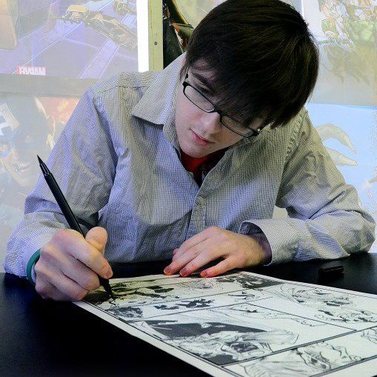 Doctors at Pennsylvania Hospital in Philadelphia, PA discovered a small, gleaming ship in the delivery room on November 27, 1987.  They opened the hatch and an incandescent green light burst onto the walls of the room.  As the light from inside the ship began to cease and subside, the image of a baby boy became evident.  Attached to the boy's bib was a note that read, "Deliver to Ma and Pa McNulty."  The couple took the boy they would name Philip to his new home in Mount Laurel, NJ.

Philip became fascinated with the arts at an early age.  At the age of three, while illustrating an amalgamation of a man and a spider swinging from New York rooftop to New York rooftop on the fresh, untarnished back of an uncolored page from a coloring book, Philip was removed from his wooden chair by a green bolt of pure energy.  Philip found himself traveling beyond comprehension, beyond all rationale and understanding.  It quickly led him to a place of bliss where he found his true life calling, a calling that lit up his path for the future like a lantern in the darkest night.  When he arrived back in his wooden chair and finished his Spider-Man, he was empowered.

But the journey didn't end there.  And neither did his passion for art.  Philip decided to take what was a hobby as a child all the way through his elementary and high school days to college.  Philip attended the Richard Stockton College of New Jersey in 2006 and found deep appreciation for artists Roy Lichtenstein, Thomas Hart Benton, and Jack Kirby to add to his style that was already molded by the likes of Todd McFarlane, Jim Lee, Rob Liefeld, and Dan Jurgens.  His  vigorous studies in 2D design, sculpture, Photoshop, Illustrator, Flash and other art forms equipped him with a broad array of artistic gadgets to add to his utility belt.  He spent many days and nights in the dark of the campus's computer labs, the stale luminescence of the Mac screen offering its only source of light in his personal bat cave.  His hard work was rewarded as he had his first art show in the Stockton Gallery of Art from April 19-22, 2010 showcasing his talent through a personal narrative told in the form of non-other than the graphic novel.

Quite Simply, Philip McNulty is an animator, illustrator, and comic book geek.